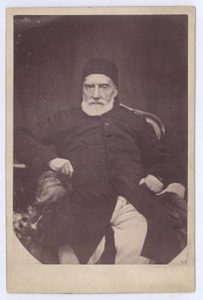 He was born in Kotel in the family of Tsonko and Gana Hadji Tanasova, grandson of Sofronii Vrachanski. The name Bogoridi was given to him and his brother Atanas in honor of Prince Boris I the Baptist, also known as Bogoris. Stefan Bogoridi studied at the Greek "St. Sava" College in Bucharest, where he changed his birth name Stoiko to the Greek Stefan. After studying at a recommendation of his grandfather Sofronii Vrachanski for a while in a Phanariot family in Istanbul, Stefan Bogoridi was a translator in the Ottoman fleet and in 1799 participated in the expeditionary corps of Mustafa Pasha (the future Sultan Mustafa IV) against the 1798 Egyptian French Corps of Napoleon Bonaparte. In the fight against the French on Abu Kir, on August 17, the Ottoman forces underwent a defeat, and Stefan Bogoridi was saved by accident from a British ship.

In 1812, Stephen Bogoridi went to Moldova with Prince Scarlatt Kalimahi, who appointed him as Governor of Galatz (1812-1819). In 1821, during the Wallachia Uprising of Tudor Vladimirescu and the subsequent invasion of the Filiki Eteriya in Wallachia Bogoridi was the nominal kaimakam of Wallachia. The following year, following the rapid Ottoman offensive against Alexandros Ipsilantis, Bogoridi was a Moldavian kaimakam and then became a dragoman in the Ottoman fleet (1823-1825). Between 1825 and 1828 he was sent to exile in Izmit (Nicomedia), Asia.

Following the Russo-Turkish War (1828-1829) and the subsequent Edirne Peace Treaty, Stefan Bogoridi heads the Ottoman delegation in St Petersburg, which should settle disputed issues with Russia. Bogoridi successfully dealt with the mission and won the confidence of Sultan Mahmud II, who appointed him as his counselor. For 30 years, Stefan Bogoridi participated in all the major and important negotiations and decisions of the High Gate - recognizing the independence of Greece in 1830, in the preparation of the Unciariskellesian Treaty (1833), in defining the status of the Danubian Principalities. The English ambassador in Constantinopol Kaning, later Lord Stratford, tells in his memoirs how, thanks to the diplomatic mission of Stephanaki Bey, Greece gained its independence.

In 1830 several prominent Bulgarians from Bulgaria - Vasil Nenovic, Ivan Seliminski, Mihail Kifalov and Dr. Nikola Pikolo made a project for an autonomous Bulgarian principality in Dobrudja. The project is presented at the Divan's office in Wallachia. He is also acquainted with Prince Stefan Bogoridi, who is trying to present the idea to the Turkish authorities, but without success.

For Bogoridi's merits, Mahmud II gave him the title of prince (Turkish bey, bey, Greek ruler, Igemonas) and in 1834 appointed him as governor of the island of Samos. Bogoridi, who rebels Vati, the main town on the island in his own name - Stefanopolis (in Greek Stephanopoli), visited Samos only once in 1839 and managed the island from Constantinople. From 1844 to 1849, the deputy of Bogoridi in Samos was his personal secretary, Gavril Krustevich. Bogoridi is hated by the local Greek population because of greed and dictatorial methods of government. In 1849 the Samos revolted against him and the sultan took him down in 1850.

In the same 1850, following the massive uprisings in Vidin, Belogradchik, Kulsko and Lomsko in the months of May and June, caused by the failure to implement the agrarian reform in this region, the High Gate under the influence of Prince Stefan Bogoridi carried out administrative reform, forming a new administrative area of the three revolted nahii. The implementation of agrarian reform started, with the Bulgarians having the opportunity to receive land.

During the rule of Sultan Abdul Medjid I, Stefan Bogoridi is a member of the Tanzimatan Council and an Imperial Councilor, a post created specifically for him. Stefan Bogoridi is the only Christian who, since the conquest of Constantinopol by the Ottoman Turks in 1453, welcomed a Turkish sultan in his house. In August 1849, Stefan Bogoridi received permission from the Sultan to build a Bulgarian church in Constantinople and donated his house to the neighborhood of Fener (1849). A small chapel, sanctified on 9 October 1849, dedicated to St. Stephen in honor of Stefan Bogoridi, was built by voluntary aid. At the same time, the famous Iron Church was erected.

Stefan Bogoridi maintains the Hellenic Bulgarian school in his native Kotel and protects many Bulgarian students such as Gavril Krastevich and Georgi Rakovski in their training in Constantinopol and abroad.

His grandson, Emanuel Bogoridi, writes about him:


He was low in height, and sturdy. His eyes were gray, his gaze sharp and a bit stiff. He continued to wear the old oriental suit, although Sultan Mahmoud had reformed the clothing in the Turkish Empire: with a belt around his waist and a long caftan, then blue or white, lined with some light skin. On official occasions, he only wore the stambolino, the Turkish fastened to the top, or the uniform. He was carrying a fez, but a former Turkish diplomat, Greek at birth, Dimiraki Aristarchi, in a sharp brochure written when the Bulgarian Exarchy was founded, called Bogoridi Panzalez "anaphandos" and tells with a ridiculous outrage that he had often seen it in the great religious celebrations in the patriarchal church of the patriarchy with a "vulgarized cap" in his hand, in order to put him to death after leaving the church.