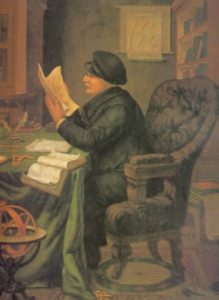 Dr. Petar Beron is one of the famous renaissance Bulgarians - education figure, scholar, encyclopedic, pedagogue, philosopher, physician and naturalist. He studied in his hometown and then went to Bucharest at the famous Bey Academy - a school of Greek pedagogue K. Vardalah. Then he went to Brashov where he became a teacher in the family of Sliven merchant Anton Ivanov. With his moral and material support Peter x. Berovich issues the ''Riben Bukvar'', and later sends him to follow Germany's first philosophy, and then goes to study medicine. After completing his higher education, he began to work as a district doctor in Craiova, and in the meantime organized a commercial company that brought considerable profits.

Retired from medicine, Dr. Peter Beron writes in every field of science, is a member of various international scientific societies, knows 9 languages. More than 20 schools, including girls only, were found with his material help - one of them is the girls' school in Kotel. In one of his letters to the Kotel old men wrote:

"I would like to find someone to pay, to go and see if there is a school in every town in Bulgaria..."

After the death of Peter Beron with the money from his inheritance, Edirne's male high school was found, which for 30 years sustains by the inheritance interest. The "Dr. P. Beron" Fund was also created, which provides scholarships to the children of Kotel who want to continue their education.

Written by Petar Berovich and published in 1824, "Bukvar with different teachings" - the so-called Riben Bukvar, is a small encyclopedia that provides knowledge not only in reading, writing and calculus, but also in brief natural-scientific knowledge.

The bukvar (ABC book) is also the first Bulgarian children's book. For the first time there are artistic readings of a secular nature. For the first time, there are also health tips on how to keep a person healthy. For the reference, Yurii Venelin says, "I have not seen a single Russian letter to compare with the merits of this teaching book." The book underwent six editions in huge circulation during the period 1824 - 1862.