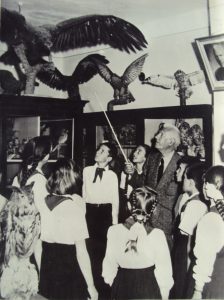 Born on February 8, 1875. He is educated in Kotel, Sevlievo and Vidin. He returned to Kotel and started working as a primary school teacher in 1884. After the fire at Kotel in 1894, he taught in Tulcha, but a few years later, the Romanian government obliged the training in the Bulgarian schools to be conducted in Romanian. This closes the Bulgarian schools. He continues to work as a teacher in Harmanli, Kostenets, Klisura, Gradets, Omurtag. The director of the Omurtag School teaches him the process of stuffing animals and birds.

V. Georgiev teaches natural history and collects various "plants and animals", fossils - which he sends to the Natural History Museum in Sofia.

Because of his selfless work in 1906, the Ministry of Enlightenment offered him an examination to recognize that he had graduated from a Teachers' Institute. After that he was appointed a regular junior high school teacher. In 1913 he was mobilized during the Balkan wars, injured in both legs and after his recovery he was returned to 11 Sliven Infantry Regiment.

After concluding the armistice and the end of the wars, he was appointed a teacher in Kotel.

In 1924, V. Georgiev organized an exhibition at the Third Sofia High School of all he had gathered as a naturalist. The exhibition was opened by zoologist Ivan Buresh. All exhibits were purchased by the Ministry of National Enlightenment, the Sofia Natural Hostory Museum, schools and private persons.

V. Georgiev continues to collect plants, insects, fossils, prepares animals and his home turns into a Natural History Museum. His collection is highly appreciated by scientists from the Bulgarian Academy of Sciences and it is decided to open a Natural History Museum in Kotel. This became a fact in 1952 and this is the first provincial museum of natural history opened in the country. V. Georgiev was appointed his first curator.

He has been awarded with silver and gold medals for long-term teaching and for his activities.