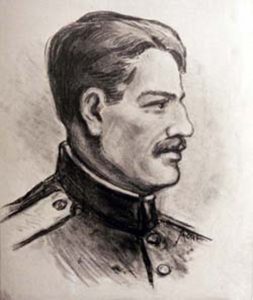 The life of V. Chardakliev is a string of tests. During the plague epidemic (1813) he went to Sopot to learn "the craft of metallurgy (goldsmith)". After two years he returned to his native Kotel, where he taught "prayers on a board, because there was no paper and the original ABC book had not come out yet," says Vasil Hadzhivalkov himself. He only studied six months and went to his father, a shepherd in Dobrudzha. There he learns to heal wounds, which skill will benefit him in the years to come.

Around 1823-1824 he went to Bucharest to study painting craft. He returned to Kotel, opened a shop, produced paints and sold them in Ruse.

He ended up in the Turkish capital and there, V. Hadzhivalkov, healed the artillery commander who, in gratitude, recommended him to Chief Kara Dzhenem. Thus becomes girah (wound healer) in the corps of the Turkish artillery by receiving salary and patronage.

During the Russo-Turkish War of 1828 - 1829, along with the artillery corps, he went to Shumen. There he switched over to the Russian side, meeting even with the Russian emperor Nicholas I saying he would serve "with all fidelity to his last drop of blood." He was then assigned to the Russian Army's 7th Corps under the command of a Gen. Riediger as a non-commissioned officer, and was later produced as a captain. From the Russians he also received the name Valkov. The Russians already have full confidence in him and throughout the war he is at the forefront of the army and always close to the commanders who want his opinion on various issues about the upcoming battles.

In 1829, Commander-in-Chief of the Russian Army was general Dibich and Chardakliev is almost always close to him. In the Battle of Külefcha, 600 people under his command and other Russian troops shatter the Turkish troops.

For the victories of the Russian army, Hadzhivalkov writes: "This was the celebration of Christianity ... Two hundred thousand and more voices of the victors were coming, and the Balkans were shaking, witnessing the breaking of the last Muslim power ..."

During the war the captain captivated "a Turkish flag of first rank". For this he was awarded with the greatest Russian military award "Georgievski Cross". "Then,'' Chardakliev says, "I was given another medal by Generalsim Dibich for my other merits. I have been given attestations of my good behavior and of the diligence I have shown throughout my service until the conclusion of the Adrianople Peace. "

However, the Odrin agreement between Russia and Turkey, concluded in September 1829, does not improve the situation of the Bulgarians and, along with the withdrawal of the Russian troops, the Bulgarians emigrate. Captain Valkov, along with his family, is also emigrating and settling in Braila where he opens an inn and a shop. Despite the accumulated state, he does not give up his plans for the liberation of Bulgaria. The captain is one of the organizers and leaders of the Ist (1841) and IIIrd (1843) Braille rebellion. After the Ist rebellion failed, he escaped to southern Russia, but after the ІІІrd he was arrested, and despite his denial, the testimony of the other captured identified him as an organizer. Due to his involvement in the rebellion, his Russian citizenship was taken away and sentenced to 15 years in the salt-pan of the Telega River. His orders and medals given to him by Emperor Nicholas were taken away. During the war, the captain organized the prisoners of rebellion. There followed a loud process in Bucharest, after which Cap. Valkov is sentenced to a lifetime in a deep salt shaft. He was left without water for 20 days, and the cruelty towards him was brutal. V.Volkov is shocked by this attitude and exclaims: "God, Lord ... These can not be people! They say they are called Christians! "

Only in 1848, during the bourgeois-democratic revolution in Wallachia, he and other participants in the rebellion were released. The captain takes his orders and medals from the Russian consulate and head for Braila with his family. And because he is in danger of being arrested again, he returns to Kotel, but he is forbidden to cross the border and until 1853 is separated from his relatives.

During the Crimean War Cap. Valkov commands the volunteers. Later, he was sent to collect volunteers from Dobrudzha, organized the self-management of the Bulgarian municipalities in the lands freed by the Russians.

The captain creates, Bulgarian National Flag, as he says. It is made of red silk. On one side is depicted St. Georgi with inscriptions: "Long live the protector, the great Emperor Nicholas Pavlovich. 1st Bulgarian Flag, 1854 January. "On the other side, there is a cross and a lion with the inscription" God with us - fight brothers for faith and fatherland. "

The battle flag is illuminated in the town of Machin and is handed over to the third volunteer Bulgarian company. (Ms. Ek. Zlatoustova tells that in her autobiography, her grandfather N. Batsarov mentions that V. Valkov from Kotel has brought from Braila to Machin a special flag for the Bulgarian Rebellion.)

With the completion of the Danube campaign of the Russian army in June 1854 and its withdrawal to the north of the Danube, the captain went to Russia and, after the Paris Peace of 1856, returned to his family in Braila. His two shops were burned, and his grief is huge after the death of his son Scarlatt, who died at the age of 34.

Kapitan Hadzhivalkov died at 80 years in 1882

At the end of his memoirs, he writes: "I summarize myself and conclude that man is obliged to serve and sacrifice as much as possible for his Fatherland." His whole life has just passed under the sign of his thought.