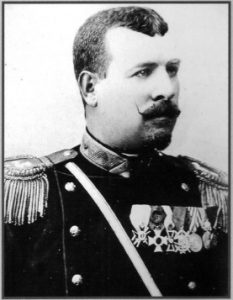 Major-General Vasil Petrov Delov is a person who is not very well known and has to take a worthy place in Bulgarian history. He comes from a popular Kotel family. Born on December 25, 1861, in Kotel, Petraki's family, Nikolov х. Vichov and Todora Krastevich Baeva - sister of the governor-general of Eastern Rumelia Gavrail Krustevich. For both, this is a second marriage. Petraki x. Nikolov is in close relation with Stefan Bogoridi and G. Krestevic. Petraki is a grocer and a practitioner. He studied in Constantinople and knows several languages. For his medical practice, he has been practicing "Practical Medicine" since 1854, translated by the Anastas Granitski Kotel.

In this large family there are 10 children - stepped, welded and reborn. Of these, the generations of Delovi started - called so because they lived against the top of the "Suhi Dyal". Mirsky - their house looked at the Mira area.

From the Delovi family, Atanas Belopahov is a chemistry teacher. Almost all known Kotel families are genetically related.

V. Delov studied in his native town of Kotel, in Gabrovo and after the April Uprising (1876), went to Tulcha. After the Liberation of Bulgaria (1878) he settled in Sofia and continued his education at the newly founded Military School, which ended on May 10th, 1879, and was made First Officer.

As a soldier, he is the commander of companies and regiments in Burgas, Pazardjik, Plovdiv, Vidin, etc. Vasil Delov also writes books for training of soldiers, which helps the Bulgarian army during the Serbian-Bulgarian War (1885). Until 1887 all orders were ruled by Russian statutes, because until the Unification of the Principality of Bulgaria with East Rumelia, the army officers were Russian, and only a small part were Bulgarian commanders. There are a few more books for training the Bulgarian army.

From January 1, 1893 to March 22, 1900, Vasil Delov is the commander Her Majesty Princess Klimentina of the 9th Plovdiv Regiment. Delov takes care of improving the living conditions of soldiers in the barracks. "For this purpose," he wrote in his memoirs, I first ordered the water. Immediately afterwards, I ordered the barracks to be built, and they could not be visited by outsiders without control. Then I took care of a special building of the musical command. On my order, they also built: dining rooms for soldiers, stables, kitchens (the old ones were unfit), tailor's shop, shoemaker, carpenter's shop, weaponry, blacksmith's shop, weapons ware and cartons and washbasins ... library and nursing club for soldiers ... "

The Ninth Plovdiv Regiment becomes one of the first and is an example for inspections. During the visit of Prince Ferdinand and Princess Klimentina in Plovdiv, the regimental soldiers are going to a ceremonial march in front of them. The prince asks the regiment, why soldiers are so black and ragged. The commander replies: "They are black, because there are quite a few gypsies among them, and the others were on the harvest and blackened by the sun. Despite my repeated requests to the main commissariat in Sofia for new clothing,My request was not satisfied. Prince Ferdinand seemed to dislike this straightforward answer and followed an order for the transfer of V. Delov to Vidin as commander of the 3rd Bdinski Regiment.

In Plovdiv V. Delov marries the daughter of the secondary teacher Dimitar Dushanov Nadezhda. They had sons Dimitar and Petar and daughter Toshka.

Major General Vasil Delov participated with his troops in the Serbian-Bulgarian and the two Balkan wars. For his boldness, his personal example, for the writing of the Bulgarian Army's training books and all his military activities, he was awarded a number of medals.

Writing his memories in 1936, Major General V. Delov noted: "It is important to note that during the Balkan War of 1912/1913 and during the European War, when Macedonia was occupied by our troops, Macedonia had to proclaim for autonomy and no one could oppose it. In 1913, the declared by us Allied War on Austria's suggestion to break the Balkan Union was a big mistake because against us were: Turkey, which occupies Thrace and Edirne, Romania, Serbia, Greece and Montenegro " .