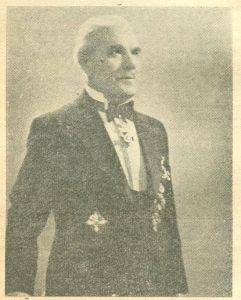 Prof. Dr. Stoyan Belinov is a well-known founder of Bulgarian otorhinolaryngology and otoneurology. He was born in 1872 in Kotel, in the family of Ivan Byalata and Slava Zhecheva Hadzhivareva, who originated from the famous Kotel Apollon family. Stoyan Bellinov graduated in St. Petersburg. Specializes in Vienna and St. Petersburg. During the wars Dr. Belinov is the chief of military-field hospitals. He devoted almost twenty years of his life to scientific and teaching work at Sofia University "Kliment Ohridski". He is the author of our first university textbooks on otorhinolaryngology.

Professor Belinov is working on socially significant diseases from otorhinolaryngology. His scientific work is accompanied by over 120 scientific papers, which are practical and highly appreciated by European medical circles. It can be said that he introduces the Bulgarian otorhinolaryngology in Europe. Professor Dr. Stoyan Bellinov died during the bombing of Sofia on January 10, 1944.