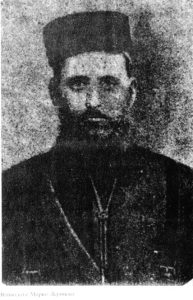 Georgi Ivanov was born on June 20, 1862 in Kotel. In 1883 he entered military service in the Principality of Bulgaria. He took part in the Serbian-Bulgarian War and was honored with a medal and promoted in rank. His comrades add the name of Geroiski(heroic).

In 1895 he left the army and takes part in the Macedonian committee's cheta campaign of 1895 in the chetas of Stoyo Kostov, who burned the town of Dospat. After the failure of the action, he returned to the army as a lieutenant.

In 1900 he was associated with Gotse Delchev and Gyorche Petrov, who attracted him to IMRO and sent him as a voivoda in Lerinsko, where he took the nickname Marko. At the same time, Hristo Chernopeev, Atanas Babata, Mihail Apostolov - Poppeto also went in to Macedonia. Due to the military training of Marko Voivoda and his organizational abilities, his cheta became a school for the training of chetas and voivods for the whole revolutionary organization. Marko turns Lerinsko into ...

"... an area exemplary in every respect. Workers enthusiastic, organizations tight, disciplined cheta and in the full sense of the word agitational-organizational. All this was the work of the Marko ... "Hristo Silyanov, 'Macedonia's Liberation Struggles'
"Marco Lerinski stayed with the cheta in winter in Kostursko and Lerinsko. In these districts, especially in the last one, there were better conditions, and Marko found a better reception and stayed for a long time. He worked there faithfully until the end of his life and left dear and unforgettable memories among the population. "Georgi Pophristov for Marco Lerinski

Marco Lerinski is the first to offer a lifting of a general uprising in Macedonia and the Adriatic. The Voivoda is active in Kostursko, Vodensko, Larynsko and Bitola with Gotse Delchev, Pando Klishev, Vassil Chekalarov and Lazar Poptraykov until the beginning of 1902.

"He organized the first reading in Bitola County, where the agitational and organizational work was conducted correctly and in parallel with the combat training. Haramii like Kote could not stand the barracks discipline in his squad. But the unspoken, simple people and the intelligent, unprotected physical and circular prophanas in military art had something to learn from Marko. Strict to himself, he limited his need to self-torture, with iron firmness in bearing the miseries, Marko was acting on others mainly by his own example. He instructed his simple comrades to engage in fatigue with training and encouraged their ambition to train peasants, particularly young people, filling their free time in the villages and the forest. Even his East dialect, in which he did not add any local word, influenced the illiterate chetniks and the more awake peasants. With such an eager and experienced master, it was not hard for teachers to tolerate the situation of simple chetniks and to acquire the most necessary knowledge and practice in a short period of time so that they could also command chetas themselves. Many Marshal chetas received Marko's first rifle exercises. Under Marko's influence, Mitre Vlaha, whom our readers already know, was reborn. Dyne Klusov, a later voivoda, Lecho Nastev, high school student, leader of the revolt, Kitsse and Dine Abduramana are the most personal studnets of Marko of Lerinsko. Marko also trained the teachers Methodi Patchev from Ohrid, Slavko Arsov from Stip.Hristo Silyanov

After the betrayal of local Greek followers, Marko Voyvoda died in battle with Turkish troops in the Lerini village of Patele (today Agios Panteleimonas, Greece) on June 13, 1902. He was buried in the church in Surovichevo, Lerinsko. In place of Marco are the voivods subordinate Georgi Papanchev and Dine Klyusov.

"His name was like a legend going from mouth to mouth, he himself was a spirit-messiah whom the people worshiped and in whose sermons they believed as they believed in Christ. After two years of continuous superhuman effort, he could see a building from nothing untouchable. Marco had no enthusiastic lyricism for a terrorist who was defiling Krustyu Assenov, but he had the Krustyu's inhuman physical force and was no less ruthless when it was needed. "Newspaper ''Revolutionary Sheet'', part of the IMRO
„ … прочулия се подир няколко месеца Марко Лерински, инструктор на четници и войводи в Западна Македония, прославил се с героичната си смърт подир една неуморна и образвоца във всяко отношение революционна дейност.”Kiril Parlichev for Marco Lerinski