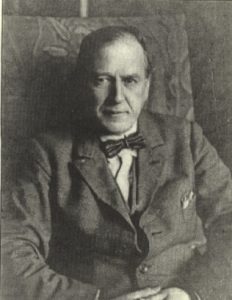 His whole name is Krastiu Georgiev Stanchev. His grandmother Nanka Turnanska is the sister of Georgi Rakovski. Krastiu Rakovski follows medicine in Geneva and falls under the influence of socialist ideas there. Later, he continued his studies in Berlin, Zurich, Nancy and Montpellier. In 1893, he defended his doctoral dissertation on the social roots of crime. Even then it was printed in French and a few years later in Bulgarian.

He actively collaborates with Bulgarian and foreign magazines and newspapers. He is the author of several publications.

His revolutionary activity atracts police attention. He participated in the creation of the Bulgarian and Romanian Socialist Party, member of the Executive Committee of the Second International, the Prime Minister of Ukraine at the time of Lenin. For short, he is Deputy People's Commissar of Foreign Affairs of the USSR. Between 1923 and 1925, he became the first Soviet ambassador to London, and in 1925-1927, Ambassador to France. Kr. Rakovski speaks strongly against Stalin and is expelled from the Bolshevik party and exiled to Central Asia. After a few years he was reinstated in the party and worked for a while in the Ministry of Health. It was then that he was sent to Japan at the head of a Soviet Red Cross delegation. Later, it would be used against him at the lawsuit of the so-called "right-wing block" in 1937, as it was condemned by Japanese intelligence. He was sentenced to 20 years in a labor camp, but on September 11, 1941, he was imprisoned in Orel, along with 154 political prisoners.

Krastiu Rakovski is declared an enemy of the people. Even today it is not known where his tomb is. On February 4, 1988, the Supreme Court of the USSR adopted a decision to repeal the verdicts of the "right-wing block" for lack of evidence of spy activity. Among the rehabilitated, besides Krastiu Rakovski, there is another Bulgarian - Ignati Kazakov, born in Tvarditsa, Bessarabian governorate.