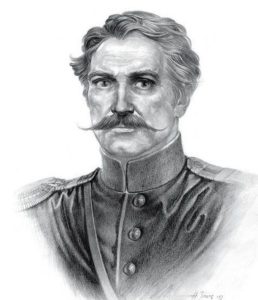 Georgi Mamarchev is one of the most active participants in the preparation of the revolt from the mid 30s of XIX century, whose contribution has so far remained undervalued. Until the early 30s, when the conspiracy began to become known as the Velchova Zavera, he gained considerable experience in the struggles against the Ottoman rule. The young soldier received his battle baptism during the Russo-Turkish war in 1806-1812. He was included in the headquarters of the Bulgarian Land Army formed in 1810-1811 and participated in a number of battles. He is known as a brave warrior.

He participated in a Bulgarian volunteer squad, called "Bolgarskoe zemskoe voysko", during the Russo-Turkish War (1806-1812). In 1812 he participated in the Fatherland War of Russia against the invasion of Napoleon.

During the next Russo-Turkish War (1828-1829), Georgi Mamarchev was at the forefront of the Bulgarian volunteer squad to the Russian army, which made a decisive contribution to the liberation of Silistra, which then reaches Sliven.

After concluding the Adrianople Peace (1829), he attempted to rebel in Sliven, Kotel and Tarnovo. But then the Russian Command countered it. Georgi Mamarchev was arrested in order not to provoke international complications.

He took part in Velchovata zavera (1835), but because of its failure he was captured on 4 against 5 of April, 1835, in the Plakovski Monastery. Thanks to his Russian citizenship, he avoided a death penalty (which all other creators of Velchova zavera suffered), but was exiled to Konya, later moved to Samos Island. At that time, the island was in a possession of Phanariot, Stefan Bogoridi, and was run by Gavril Krastevich, all from Kotel. Georgi Mamarchev died on Samos from a natural death in 1846.