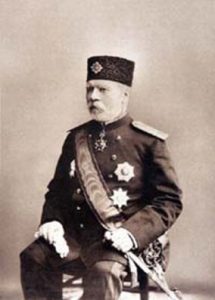 Gavril Krustevich is a prominent public and state figure, a collaborator of a number of Reinassance newspapers, the first honorary member of the BTC. He graduated law in Paris. He is private secretary of Prince Stefan Bogoridi and his deputy on Samos island.

Gavril Krustevich is also a fighter for church autonomy. His draft is a statute of the Bulgarian exarchy. He is director of the interior of East Rumelia and her second Governor-General. As such, the Unification of the Principality of Bulgaria with Eastern Rumelia is provoked. Upon his arrest, he voluntarily passes the key to the town of the Chetniks with the words "And I am a Bulgarian, boys". He first proposed the idea of ​​creating a BKD because of the need for editing the literary language. He writes on Bulgarian history matters and issues the book "Bulgarian History."