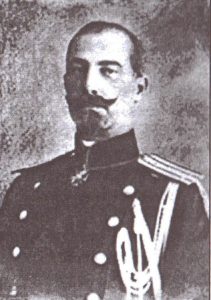 He was devoted to the military field at nineteen years of age and in 1885 he graduated from the Military School in Sofia, the General Academy in Italy in 1893 and the Military Academy in Sofia in 1914.

A military attache is in St. Petersburg and Vienna. He participated in the Serbian-Bulgarian War (1885). In 1905 was promoted in the rank of Colonel. He served in the General headquarters at the Military Ministry.

During the Balkan War (1912) he was the 1st Army Chief of Staff. Immediately after the signing of the Bucharest Peace Treaty, he was appointed Chairman of the Bulgarian-Greek Border Commission.

He was the chief of staff of the newly formed 4th and 5th armies during the Inter-Allied War (1913). During the First World War (1915-1918) he was the head of the 6th Infantry Division, which is part of the 1st Army, and fights on the Macedonian Front. He dismissed himself from actual military service in the rank of Major General in 1915 and worked in the General headquarters until 1930.