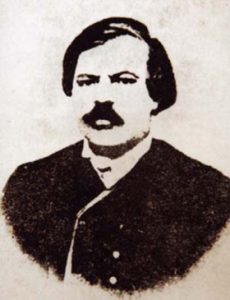 Renaissance writer, education figure and translator. He is educated in Kotel, Sliven, in the Greek school in Kurucheshme, and then in the Imperial Medical Academy in Constantinople. Later he left the academy and devotes himself to literary activity.

He becomes one of the most famous calligraphists and translators, who speaks about ten languages. Granitski is a collaborator of "Tsarigradski Jurnal". For about ten years he has printed 18 author compositions and translation pieces in Bulgarian language. The translation of "Practical Medicine ..., 1854" is considered to be the first manual in medical science in Bulgarian. In it there are two lithographic charts, painted by Granitski, as the first attempt to represent the human organs with drawings. It also contains material for the Bulgarian medical-pharmaceutical nomenclature and others. Of particular interest is his manual introduction, which sounds very relevant today.

Granitski also publishes the "Trading Management ..." (1858), which is the first one appearing on the Bulgarian lands.

Because of the strong need of teachers in the Bulgarian municipalities, Anastas Granitski decided to dedicate himself to this field. Teaching in Shumen, Turnovo, Lovech. At the same time he continues his literary activity. Next year after the Liberation, he died in Turnovo after a severe illness.