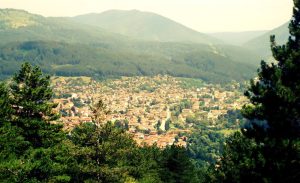 The town of Kotel is situated in a small picturesque valley in the eastern part of the Balkan Mountains, at 527 meters above sea level. Kotel enchants with its beauty - a small town nestled amidst the freshness and charm of the mountain, in the cauldron of the forest charm.

The climate is moderate continental, with an impact on the mountain climate - snowy winter, cool summer and warm and prolonged autumn. Air is pure and beneficial for the treatment of pulmonary and bone-joint diseases. In hydrographic terms, the region is rich in mountain springs and small rivers mainly with rainy-winter nourishment. On the territory of the town and the region, from the mountain peak (connecting the Kotel with the Ticha-Omurtag region) "Suhi Dyal", two major rivers flowing through the city spring: Suhoika and Glogova. In the village of Gradets, they flow into the Gola Kamchia River, which is one of the Luda Kamchia River's sleeves, flowing into the Kamchia Dam. The average rainfall is 799 mm per square meter with a minimum in the summer.